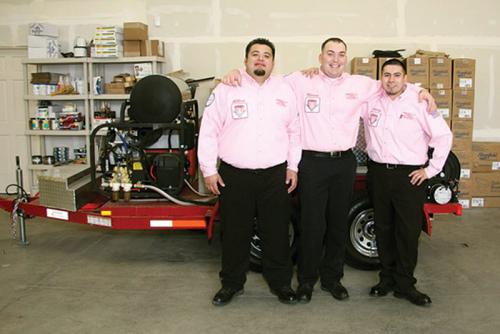 Source: Cleaner Magazine : Bringing The Heat by Ken Wysocky
Marcus Rodriguez often finds himself in hot water with customers — and he wouldn’t have it any other way. That’s because his trailer-mounted Hot Jet USA water jetter, made by Power Line Industries and outfitted with optional hot-water capability, makes short work of tough drain cleaning problems.
“Most times, it does a job about twice as fast as using cold water,” says Rodriguez, the owner of Umbrella Plumbing & Drain Cleaning LLC in Aurora, Colo. “It’s especially good for cleaning out grease-trap lines.
“The hot water, which gets heated to a temperature of 180 degrees, liquefies the grease,” he explains. “I’ve used both cold and hot water and there’s a big-time difference. With cold water you can spend a lot of time working in one small area and it can create clogs in the rest of line … chunks of grease hook up together farther down the line and form another clog.
“But by using hot water, that doesn’t happen because it’s liquefied,” he says. “So by doing jobs twice as fast, we gain time, and time is more valuable than money. Even if we get in just one more job a week because of that, we’re making $1,400 to $1,600 more revenue per week.”
Rodriguez bought the Hot Jet unit in 2009. The unit features 300 feet of 3/8-inch diameter hose, a 350-gallon water tank, a pump that generates 3,500 psi at 12 gpm, and a tandem-axle trailer, which enables him to tow the jetter with a full water tank.
“That saves me about an hour a day because I don’t have to fill the tank at a job site,” says Rodriguez.
Umbrella crews use the hot-water feature to clean residential lateral lines, too, when needed. Sometimes cable drain cleaners aren’t powerful enough to do the job, especially if it’s a sludge buildup. But the hot water usually does the trick.
Rodriguez makes the Hot Jet unit more versatile by using a third-party detachable reel that carries 100 feet of 1/4-inch-diameter hose. A quick-connect adapter connects the 1/4-inch hose to the unit’s 3/8-inch hose, and Rodriguez or another technician can then carry the reel into, say, the basement of a home. The reel combines the brute power of the Hot Jet jetter with the portability and maneuverability of a cable drain cleaning machine.
“It saves us a lot of setup and breakdown time, too,” Rodriguez notes. “If we need to bring a couple hundred feet of hose from the trailer jetter into a house, we need to take time to coil it up nicely so it doesn’t get tangled as we feed it into a clean-out. Then when we’re finished, that hose is covered with whatever you were just in.
“With the detachable reel, we just wind up the hose and put the reel in a garbage bag and clean the hose later, which saves us about an hour of cleanup time. It’s almost a must-have piece of equipment.”
Umbrella also owns three Spartan 2001 heavy-duty cable drain cleaning machines, made by Spartan Tool LLC; three Spartan 100 cable drain cleaners for smaller lines; three Spartan 81 drain machines for bathtubs, toilets and sinks; RIDGID SeeSnake and RIDGID SeeSnake microDrain pipeline inspection cameras; and three custom-built mini-jetters (2,000 psi at three gpm). The company also owns three GMC 2500 trucks outfitted with 14-foot Morgan box bodies, and a Ford 550 cab-over service truck.
The hot-water jetting capability is a big selling point with restaurants because minimizing downtime at such establishments is critical. As Rodriguez notes, the last thing a restaurant owner wants is several hours of downtime at a peak business time. If business owners are ambivalent about using hot or cold water, Rodriguez shows them a brochure he developed that shows lines cleaned with a cable machine, a cold-water jetter and a hot-water jetter.
“It’s a pretty obvious choice when they see the difference,” he says. “And I don’t charge any more for hot-water jetting — just one flat rate no matter if it’s hot or cold water.”
Rodriguez is so confident in the Hot Jet unit’s ability to clean thoroughly that he provides customers with a six-month guarantee against another clog. “We’ll do it for free as long as there’s no evidence of abuse,” he says. “The Hot Jet jetter gives us a great degree of confidence.”
Another benefit: Rodriguez is expanding into excavating and sewer-lateral repairs, and the Hot Jet unit provides customers with a feeling that Rodriguez has done everything possible to clean a line before he suggests digging up a yard and replacing a lateral.
“They see that if a big trailer jetter and 3,500 pounds of pressure can’t open up a line, then nothing will,” he says. “It’s just like with car repairs – you don’t want a mechanic to look at your car for five minutes and then tell you it needs a new engine. He may be right, but as a customer, you want to see that he’s done everything he can before resorting to putting in a new engine.”

Want to join the discussion?
Feel free to contribute!

This site uses Akismet to reduce spam. Learn how your comment data is processed.