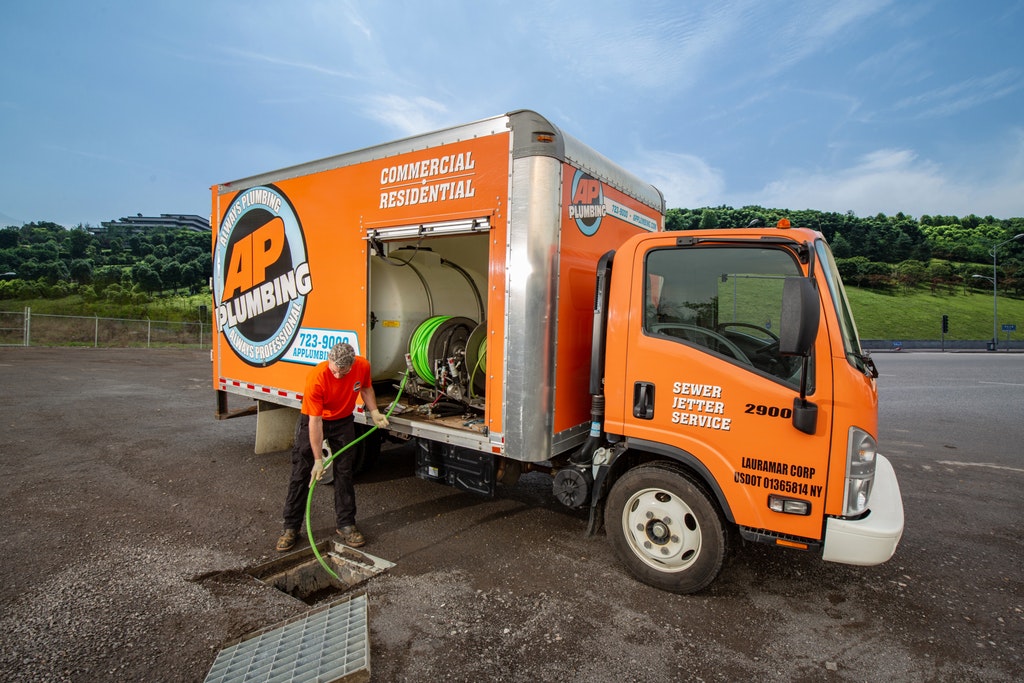 When it came time to invest in a new jetter a couple of years ago, management at AP Plumbing decided to try something different from the two trailer jetters the Rochester, New York-based company already owned. Instead, they worked with HotJet USA to design a custom jetter truck that amps up productivity and employee comfort and safety — and revenue.

The result is a 2017 Isuzu NPR dually chassis outfitted with a 14-foot-long box body and a HotJet Xtreme Flow cold-water jetter, plus numerous features aimed at making it a powerful profit center for the company, founded in 1986.

“We wanted to boost productivity at every possible point,” says Don Dugan, industrial manager for the company, which provides industrial cleaning, residential plumbing, drainline inspection and cleaning, and hydroexcavating services in the Rochester metro area. “We came up with a lot of ideas that we gave to HotJet USA, and they ran with it. They designed a much more efficient machine that makes more money.”

The box body reflects the biggest change from the two trailer jetters the company already owns. With the jetter skid-mounted inside a truck, crews now can work year-round, which greatly increases productivity and boosts revenue.

“Our No. 1 objective was an enclosed trailer,” Dugan says. “During winter around here, once temperatures fall below freezing, jetters don’t work very well, even if you use antifreeze. It’s easy to blow out pumps. But now we can service customers 24 hours a day, 365 days a year, no matter what the weather is like. That’s great because customers in a jam don’t want to hear that we can’t work until the weather warms up.”

AP Plumbing also opted for the Isuzu cab-forward design; its tight turning radius makes it highly maneuverable even in tight quarters — another timesaving feature. And HotJet custom-built the box body with a rollup door on the passenger side, which allows for curbside jetting.

“Instead of working off the back of a jetter, we work out of the side of the vehicle,” Dugan says. “That way, if we’re in a roadway, our employees work inside more of a safety zone than a danger zone in the back of the vehicle (or behind a trailer). And we don’t need a flagman or have to take time to set up cones like we do if we work off the back.”

The design also features two Hannay telescoping reels, located in the middle of the cab.

“We typically use the 1/2-inch hose for 3- to 6-inch-diameter pipes and the 3/8-inch hose for trapways and difficult bends because it’s more flexible,” Dugan says.

“When you’re pulling everything back by hand, you’re pretty shot in a short period of time,” Dugan says. “Plus, when you manually pay out hose while jetting, the speed is inconsistent. Electric payout provides a consistent speed, and that makes for a better cleaning job.”

Dual reels also save time by eliminating the need to swap out hoses for different applications. It’s also safer than disconnecting hoses that might still be under pressure, blowing out the connection.

“Again, it’s all about safety and efficiency, which in turn makes more money,” Dugan says.

The jetter itself features a large 600-gallon water tank, which improves efficiency by minimizing the need for time-consuming tank refills; because it weighs so much when full, the tank sits atop the dually rear wheels. The UDOR U.S.A. triplex plunger pump generates 4,000 psi and 18 gpm.

The truck is primarily used for commercial, industrial and residential work, mostly for cleaning sanitary and storm sewers. To further increase productivity, technicians use nozzles made by Enz Technik and Warthog nozzles manufactured by StoneAge.

“They’re more efficient nozzles,” Dugan says. “You can buy the best equipment out there, but if you put junk on the end of the hose, you get what you get.”

In addition, the truck features remote-control operation, another efficiency boost.

So far, Dugan hasn’t come across a job the truck couldn’t handle. In one instance, technicians encountered a 300-foot-long, 4-inch-diameter cast iron sewer pipe at a retail store. The line, which was badly tuberculated, was backing up three or four times a week. Even worse, access was limited, either via a toilet or two clean-outs inside the building.

“We also had to work upstream, which makes it even more difficult,” Dugan says. “And we had just four hours to complete the job, which had to be done at night. But it worked out perfect. We finished the job in about three hours, using Enz chain-cutter descalers and an Amthor International vacuum truck to collect the debris.”

At a cost of $120,000, the jetting truck represents a significant investment. But Dugan says it will easily pay for itself.

“I love it,” he says. “All the guys love operating it. They all want to take that truck instead of the tow-behind jetters. They call it the ‘jet in a box.’ We couldn’t be happier with it.”