A story that never gets old… Don’t start giving away business that you can profit from yourself. Investing in a trailer mounted sewer & drain line jetter will be one of the most important decisions you’ll make and one of the best returns on investments for your business. Check out this story from Cleaner Magazine about our customer John Larsen…

Residential drain cleaner John Larsen never planned to be a one-man show, but years ago he saw that’s what he would remain without equipment upgrades.
These days, Larsen, owner of Rhino Rooter in Brigham City, Utah, tows a trailer-mounted tandem-axle CJ85-3600TU waterjetter from Hot Jet USA with a smart-looking 2008 Ford F-350 pickup with a KUV truck body from Knapheide Manufacturing Co. and exterior-accessible cabinets. Both carry the company’s tie-dyed rhinoceros logo.
The rhino came when Larsen bought a drain-cleaning company in 2002 from Ron Rhinehart, whose nickname was Rhino. Larsen came up with the tie-dye element (he and his wife are Jimmy Buffet fans). Then the only missing pieces were a better truck and a new jetter.

Larsen saved for a couple years to buy the jetter in August 2009. He had been using a cart jetter that produced 3,200 psi/4 gpm – not powerful enough to cut roots out of laterals or quickly remove grease from lines.

After research that included attending the Pumper & Cleaner Environmental Expo, Larsen chose the Hot Jet cold-water jetter, which produces 3,600 psi/8.5 gpm and carries a 330-gallon water tank and a 35 hp gasoline engine. He was attracted by the price and the size – “not too big and not too small,” in his words.
“It cost me about $17,000,” Larsen notes. “That’s a lot of money for a one-man show. But I saw the work I was giving away. I’d unclog someone’s pipe, then camera it and still see roots down there. The customers would want them removed completely, so I was continually referring work to my competitors. When you see those dollars going into competitors’ pockets, you start thinking you should do something different.”
With the jetter and a Warthog nozzle from StoneAge, monthly sales now average six to seven times more than during his first year in business. That’s partly because the business wasn’t full-time when he bought it, but the jetter is a major revenue generator, letting Larsen do more jobs because it unclogs lines much faster.
“A jetter brings in more money because it does a better job than a cable machine, which kind of skips past the grease,” he says. “A jetter takes out the grease. And you make more money off it because you can charge more. That jetter paid for itself in the first year of business. Jetters are moneymakers if you know how to use them. Mine sends me on a few vacations a year.”
Larsen bought the truck, a repossessed vehicle, about the same time as the jetter. Before that, he hauled equipment in a small utility trailer, which he towed with his personal pickup. “I was really racking up miles on my pickup and wanted something that looked more professional and would help me stay more organized,” he says.

“To be a full-service drain cleaner, you’ve got to have a camera, too,” Larsen says. “I run the camera down there to show customers the difference, before and after. They like to see what they’re paying for. It takes more time, but you can charge more money, too.”
The tie-dyed rhino helps brand his company and generates service calls. “It’s so bright that people can’t help but notice it,” Larsen says. “I get comments on it all the time. People call in and say they noticed the logo and the phone number on the side of the truck. I guess you could call me the tie-dye sewer guy.” 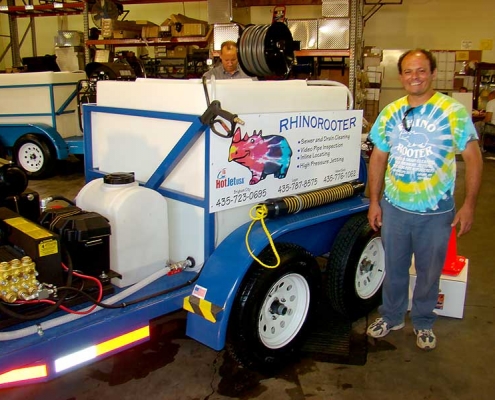 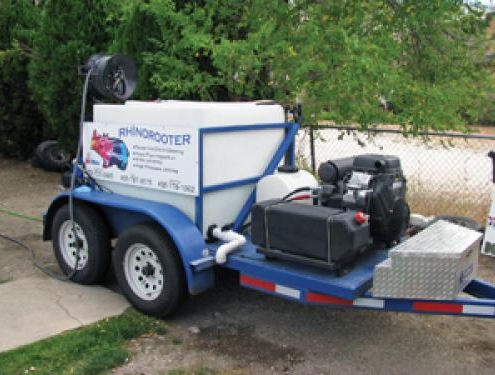 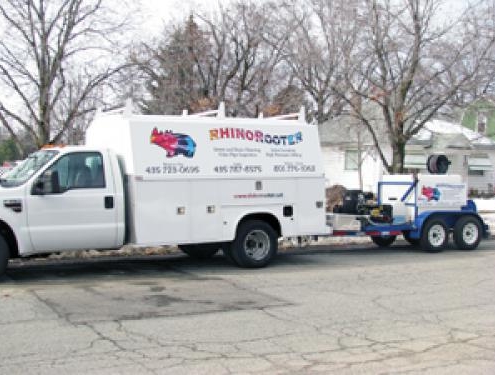